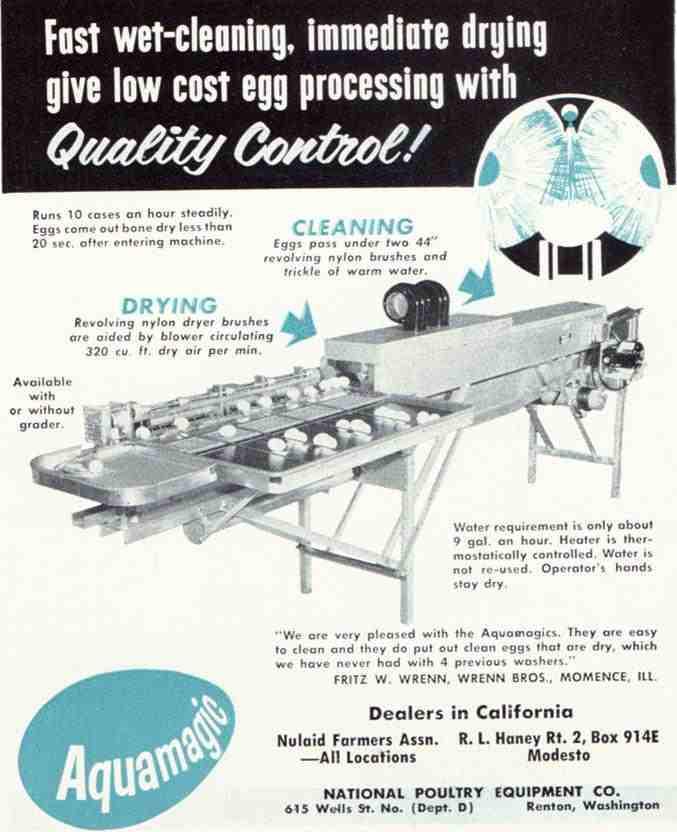 This advertisement ran in the January, 1960 issue of Pacific Poultryman. I have been using my own Aquamagic Model 60 egg cleaner since 1997. It’s a model very similar to the one shown above, though with a fancier candler. These water-spray-plus-brush cleaners are great. I’ve used two different kinds of immersion washers, and they don’t get the eggs very clean, and of course the eggs are still wet after washing. By combining candling, washing, drying, and grading into a single machine, the Aquamagic makes egg processing fast and convenient.

This is a Model 5 candler/washer/dryer/grader. It’s hard to see the water spray in the first brush section (the washer section), but it’s there:

Here’s an older Model 5. This one doesn’t have a grader section, just a big output tray for the washed eggs:

And here’s a fancy new Sani-Touch Model 10 with all the trimmings:

Over the years, there are different models of different speeds and sizes, and with different options. Some don’t have the egg grader, for instance. Mine, like the one shown in the ad at the top of the page, is something like sixteen feet long. There are also smaller models that fit in less space, run more slowly but have all the features. With two people, we run ours at about one-third of its rated speed, but the candler section is broken and we’re candling by hand. Apparently two people with a fully loaded machine can run it at about 75% of its rated speed (or 225-325 dozen per hour) without too much trouble.

How Do I Get an Aquamagic/Sani-Touch Egg Washer?

These machines are still being made by the National Poultry Equipment Company, so you can buy one new. (They’ve changed the name from “Aquamagic” to “Sani-Touch,” but they are fundamentally the same machines.

And since these egg washers have been in production for over 50 years, and are extremely rugged, you can also find them used from time to time. Sometimes they’ve been sitting in a barn for so long that the owner has no idea what the machine is, so keep your eyes open for a bargain!

An Aquamagic in poor shape can be quite a restoration project, so you might want to do your homework about replacement part prices, etc. before making an offer on one that’s in sad shape.

Parts are still available for almost everything, and the folks at National Poultry Equipment provide seemingly unlimited phone support.