Your Chickens in October

News from the Farm

The farm year is winding down. Our last batch of broiler chicks in in the brooder house. Our pigs will be sent to be reincarnated as pork, bacon, and ham before the end of the month.

We have some pasture-raised pigs available. This year’s batch is going to be good-sized, with a half-pig yielding 100 pounds of wrapped freezer meat, give or take. Call it five paper shopping bags full. These pigs have been fed not only on custom-milled feed, but whole wheat, all our cracked and otherwise unsaleable free-range eggs, and bushels and bushels of carrot tops and other scraps from Gathering Together Farm’s market booth.

Pork is the ultimate luxury meat: bacon, ham, sausage, pork chops (mmm … pork chops). It’s a purchase you won’t regret, even if you need to buy a chest freezer while you’re at it. Everyone needs a chest freezer.

Tempted? Contact my wife Karen Black at karen@nortoncreekfarm.com, or drop by the Corvallis Wednesday or Saturday farmer’s market and talk it over.

In the end, you’ll write two checks: One to us and one to the custom butcher, Farmer’s Helper in Harrisburg, Oregon. We charge $4 per pound, hanging weight, and the Farmer’s Helper charges, um, quite a bit less (I don’t have the numbers in front of me). They’ll prepare your pork according to your instructions (thin/medium/thick bacon, whether the portions that end up ground become pork sausage or porkburger, whether you want pork chops or loin roast, etc.).

Wondering about winter lighting for hens? Some people claim that putting lights on hens is like espresso, making them all jittery and hyperactive, and causing them to shoot out eggs like a machine gun, deflating the poor hens like a balloon and causing them to die before their time.

That would certainly be something to see! But it doesn’t work that way. The effect of lights on hens is far more boring and subtle than that. What actually happens is that hens given a reasonable day length (12-16 hours) in the winter lay more eggs in the winter and fewer in the spring, with a slight increase in the total production. (In one test, the difference between hens given 24-hour daylight and those kept in 24-hour gloom was only 15%. Under more realistic conditions, the difference is less.)

Anyway, the short form of traditional hen lighting (with a couple of modern wrinkes) goes like this:

Chickens and the Third World 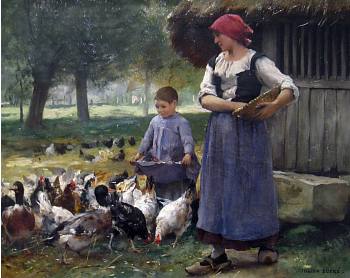 From time to time I see a proposal about scientific chicken raising in the Third World, with emphasis on small flocks. Now, you can probably guess what the traditional top three barriers to success are for poor people who want to raise chickens:

For some reason, lofty statements are being made (including by Bill Gates, of all people) that claim that the biggest problems as:

Note the total lack of overlap! Starving chickens and chickens carried off by predators and chicken thieves don’t need vaccination or a pedigree: they need feed and protection.

You can see the more practical approach in the FAQ publication, Utilisation of Poultry Feed Resources by Smallholders in the Villages of Developing Countries. This contains a lot of useful information, with the key passage being:

Disease is not commonly associated with the high mortality, the steady rate of attrition being unlike that of an infectious or parasitic disease. The primary cause is starvation (Prawirokusomo, 1988; Ologhoho, 1992; Roberts & Senaratne, 1992), the chicks and growers which die tending to have lower growth rates than the average for their brood (Wickramaratne et al, 1993). The growth rates of survivors to 70 days ranged from 2 to 7 g/day with a mean of 4.4 (Gunaratne et al., 1993). Chicks and growers which die, also tend to be those with lighter feather colors, that is, those which are more conspicuous (Wickramaratne et al. 1993). Predation is the ultimate fate of most chicks and growers (Branckaert, 1992; Roberts & Senaratne, 1992; Gunaratne et al. 1993; Wickramaratne et al., 1994). Presumably anything which weakens a chick, such as inadequate nutrition, infection or parasites, increases the likelihood of it being taken by a predator.

And it offered a very simple means of reducing mortality: creep feeders for baby chicks (a creep feeder is often used for sheep and calves, who can creep under the bottom rail of a fence an reach a feeder that the adult animals can’t reach. The same idea works for baby chicks: give them the high-grade feedstuffs they need only in tiny quantities, while preventing the bigger chickens from gobbling it down instead).

Why should you have an open-air coop this winter, instead of a tightly enclosed one? Find out by buying (or perhaps by winning) a copy of Fresh-Air Poultry Houses by Prince T. Woods, M.D. This is the best book I’ve been able to find on the subject, covering fresh-air coops and many other topics. It’s an older book, from 1924, but it’s chock-full of good ideas that you won’t find anywhere else.

To enter, use the following link to enter the giveaway. When you enter, you have a random chance of winning a copy of the book free, gratis, and for nothing. You don’t even pay for shipping. The link expires in a week, so do it now! (You need to have an Amazon account to enter, and it’s one entry per customer.)

Good luck! And may the odds be ever in your favor.

Is that a chill in the air?

Traditionally, October is a month where pullets are just about to lay, and are moved from pasture (where they had been raised) and into winter quarters that are much closer to the farmhouse, and thus more convenient for winter access.

Because many of the old hens were still around, there tended to be more chickens than there were room for in the winter houses. The usual technique was to cull all the early-molting hens, but to keep the rest for another year. About half of the old hens would be sent to market this way, sold as stewing hens. The winter flock would thus be about one-third old hens and two-thirds young pullets.

With modern hybrid layers, the flocks are much more uniform, and most of the flock will molt at once. Only a few percent will molt early. So the idea that you can sort the flock into 50% winners and 50% losers doesn’t work very well anymore. They’re mostly winners.

October is the start of a big shift in what your chickens need from you. It only takes a few months of warm weather to make you blind to the needs of approaching winter, so this month’s checklist is particularly  important–especially if you follow it!

These are my top-selling books from last month:

All of these are fine books (I only publish books I believe in). If you’re like most readers of this newsletter, you’ll enjoy starting with Fresh-Air Poultry Houses and Success With Baby Chicks. These cover the basics of healthy, odor-free, high-quality chicken housing and zero-mortality chick brooding, respectively, and get good reviews.

I started Norton Creek Press in 2003 to bring the “lost secrets of the poultry masters” into print—techniques from the Golden Age of poultrykeeping, which ran from roughly 1900 to 1960. I’ve been adding an eclectic mix of non-poultry books as well. These include everything from my science fiction novel, One Survivor, to the true story of a Victorian lady’s trip up the Nile in the 1870s, A Thousand Miles up the Nile. See my complete list of titles.

Here are the new and updated posts on my various blogs since last time:

And if that’s not enough, you can use social media to stay up to date: