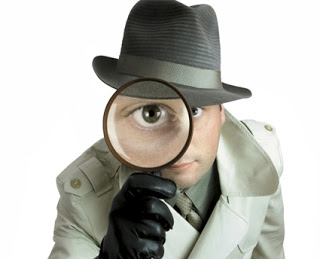 Lots of people can’t interpret a graph to save their lives, which is a shame, because that’s what it’s coming down to. But I can teach you how in just a few minutes. I’ll throw in figuring out which alleged experts to trust as a free bonus.

They’d Rather Lose a Kidney Than Say, “I Don’t Know”

The first thing to understand is that most people would rather lose a kidney than say, “I don’t know.” (Why? I don’t know.) This goes double for so-called leaders and experts.  When something unexpected happens and they don’t know what’s going on, they blow smoke. They instantly believe the smoke they blew. It takes a long time for the truth to seep into their brains, and even longer for them to admit it publicly. It’s a human thing.

So when an emergency happens, people might report the facts about the events that have already happened fairly well, but when they say why it happened or what will happen next? They’re guessing. They don’t know, but that won’t stop them. They’ll just hallucinate something and then believe it.

Events that leave undeniable evidence—fires, bodies, craters where your lab used to be—make it hard to misinterpret what happened. Why it happened is usually still a fairy tale, at least at first. Ignore the fairy tales, even if they last for months.

Fix the emergency now; hang the miscreants later. Anyone who has enough time to go into the blame game is a slacker. Don’t listen to slackers in an emergency. Unless they’re really funny.

Remember, most so-called managers and leaders are nothing of the sort. They’re just figureheads. It’s actually convenient that figureheads descend to the blame game. It reminds us that their function is decorative and we can stop listening to them.

Which Numbers to Watch

An epidemic, like compound interest or a nuclear explosion, starts with exponential growth.  That means it has a doubling time that stays more or less steady  … for a while. The way you can tell which countries are doing okay is by how long it takes for their COVID-19 cases (or deaths) to double.

Is this accurate? For the next few days, it’ll be pretty close. After that, it’ll be increasingly off.  It’s an “if nothing changes” estimate, and we’re all doing things to make it change.

Still, it lets you compare different country’s efforts. In South Korea, the doubling time for cases is 34 days, compared to our own 5.5 days, so South Korea has rocked their containment effort.

“Why didn’t we adopt the same measures they did months ago?” you ask. I don’t know. Doesn’t matter. We didn’t, and now we’re playing catch-up. We can hang the miscreants later. Can’t have a good torch-and-pitchfork mob and maintain social distancing at the same time.

You’ve probably noticed that our effort is superior when you compare us to our fellow enlightened, forward-thinking, rich, smug, complacent Western countries. Germany has a case-doubling time of eight days, the UK has one of seven days, Italy has one of twelve days … oh. Okay, so maybe we do suck. So far, anyway. We’d better fix that, pronto, don’t you think?

By the way, you can estimate the doubling time without too much trouble on the Worldometer site. Hover the mouse down the cases (or deaths) curve for a given country to find the day that’s closest to half the current number.

If you use a logarithmic scale on the vertical axis, which is often an option, a function that shows a straight line has exponential growth. That’s how you tell.  If the line is horizontal, there’s no growth (it’s still exponential, but with an exponent of zero, if you were wondering). If it has a steep slope, you have tons of growth and you’re in big trouble. As you can see from the graph below, real-world cases over time can show a straight line for a long time (steady exponential growth), which is the same as saying “a constant-ish doubling time.” 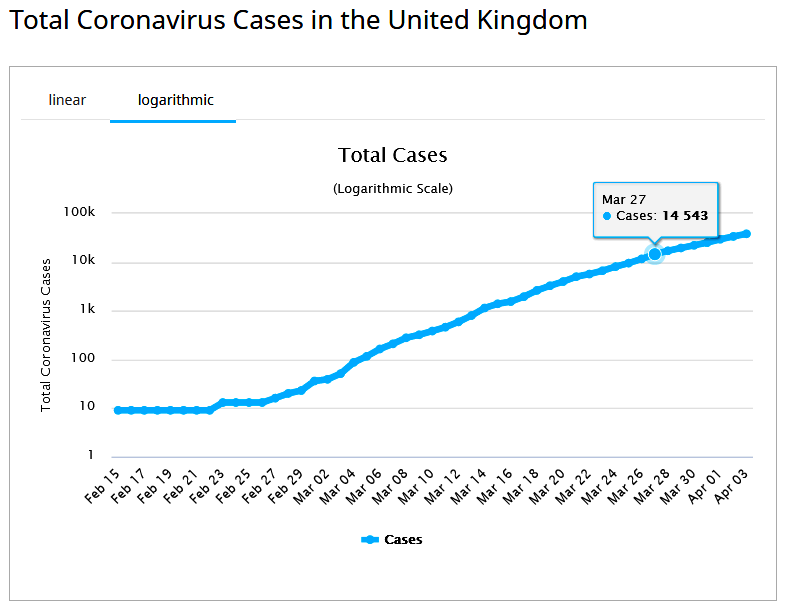 “Why is India Doing So Well?”

I keep hearing people wondering why India is doing so well. They have only 3059 cases as of April 3. What’s their secret? Is it the climate? (Yes, some people imagine that all of India has the same climate.) Spices in their food? Divine intervention?

But India isn’t doing well. They’re not doing well at all, which you’d know the instant you noticed that the number of cases is doubling every three days. If things continue at this rate, they’ll have over three million cases on May 2. Sure, they got off to a late start, but they’re making up for lost time. That ain’t victory. 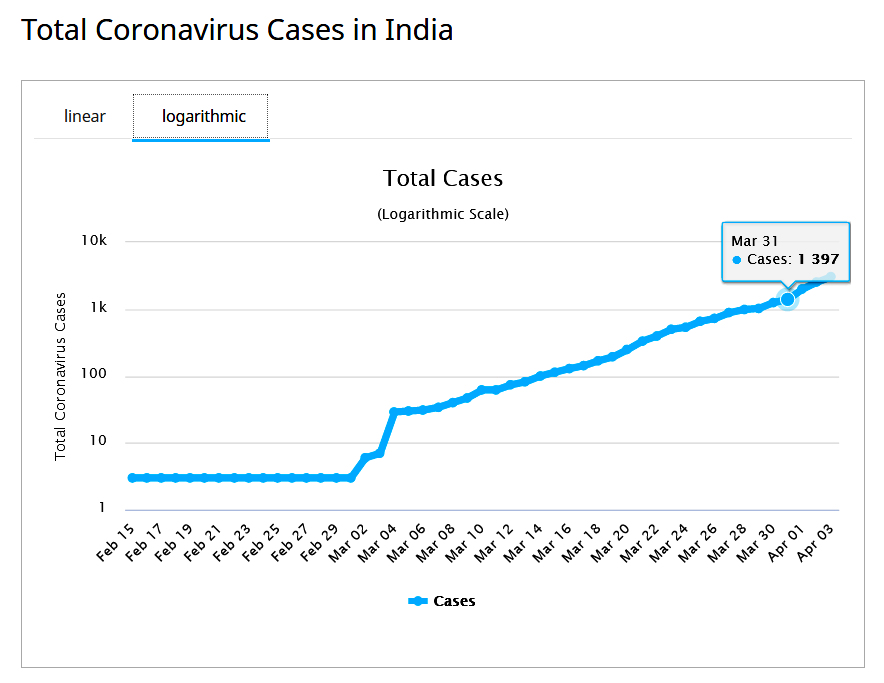 So the doubling time is how you compare the current trajectories of different countries (or states, cities, etc.).

Comparing the level of overload is probably best done by looking at whether the dead bodies are stacking up (or whether they’re being disposed of in mass graves). Even earlier, hospital fullness and doctor illness/deaths are the things to look for.

But Can We Trust These Numbers?

Not only would people rather lose a kidney than say, “I don’t know,” they’d rather lose their other kidney than release numbers that make them look bad. So it’s always fair to wonder if the numbers have been jiggered. What isn’t fair is obsessing over the numbers.

In an emergency, all your numbers are lousy, anyway. People are overworked, the situation is new and confusing, and lots of mistakes get made. So we have the whole “fog of war” thing going on, plus other kinds of generalized confusion. Maybe people are telling whoppers, too. Who knows? So we need to triangulate.

Like all good detectives, we start by asking, “Where are the bodies?” Bodies are hard to hide. People might get the cause of death wrong, but the actual body count is usually accurate. (Well, not if you’re China or one of the hermit states.)

For example, in the nursing home in Kirkland, Washington that had many of the early COVID-19 cases, 3-5 residents die in a typical month, but 26 died in the first three weeks of the coronavirus outbreak (if I remember the numbers correctly). If all-cause mortality shoots way up during an epidemic, the epidemic is real. Obviously.

Similarly, when you hear about hospitals being overwhelmed, you look for funeral homes and crematoriums being overwhelmed, too. Which has certainly happened in New York City. And as I mentioned before, mass burials are kind of a hint. Haven’t heard of anyplace doing that with COVID-19 deaths yet.

“In theory, there’s no difference between theory and practice. In practice, there is.”

Don’t get me wrong: laboratory science is essential. But it’s just a means to an end. The end is for today’s living, breathing general public to take as little of a beating from this epidemic as possible. How well this is working and which areas need more effort lavished on them depends on what’s happening in real life (and in real time).

So, for example, the bodies piling up in New York City are far more indicative than anyone’s laboratory tests or computer models, at least so far as “where we are now” is concerned. And the relative success of South Korea in containing the virus with their methods is more instructive, too.

Which reminds me of a story: My dad once went to a test of a super-high-pressure gas cylinder for a missile. The test was to see if the cylinder would burst. The guy running the test asked the design engineer if he wanted to cradle the gas cylinder in his arms during the test. The engineer said, “I’ll hold my blueprints. Let the damned welder hold the cylinder!”

In real life, it’s always the people in the front lines who are holding the cylinder.

Which Experts to Trust

Who can you trust? People on the front lines, who are having some success, and are sharing their methods with others. For example, the University of Washington Medical Center had most of the early coronavirus cases in the US. They make their COVID-19 treatment guidelines public. They update them about once a week.

One thing they do is try to get every single COVID-19 patient into their remdesivir clinical trial from the very start. Remdesivir is a new antiviral drug. If the patient is in a risk group, the rule is “consider hydroxychloroquine, even if they’re also getting remdesivir.”

Their use of hydroxychloroquine predates the dithering and panic we saw in the FDA. The folks at UW are real doctors with real patients who will really die if they make missteps. Compare this to the ceremonial blathering of people like the Surgeon General or the head of the FDA and you’ll see what I mean. (How anyone can pretend that a drug is mysterious and scary when it was introduced in 1955 and is routinely prescribed for Lupus and rheumatoid arthritis by every physician alive, I have no idea.)

Which Research to Trust?

I prefer reading research papers to anything by journalists. The purpose of journalists is to provide me with links to the research itself.

Since I like my kidneys, I’ll say right out that I don’t know. But no epidemic can maintain exponential growth forever, since it’s not technically possible to kill more people than actually exist, or even to infect that many.

I have a blog post where I predict what the coronavirus endgame looks like. This is largely just statements of the obvious without any dates or body counts.

You’d be surprised how few people are willing to state the obvious. Once we more test kits than we know what to do with, plus a zillion masks and infrared thermometers, we can do South-Korea-style contact tracing and stomp out the disease without shutting down the whole country. It worked for them; it’ll work for us. So why are we sitting around twiddling our thumbs? Because we don’t have the goods yet. Gotta ramp up production. Ramp it up to a ludicrous degree. The FDA actually had its choice of two tests, and instead of saying, “Let’s do both!” they picked just one. Let’s not do that anymore. All we need is more of the stuff that South Korea used so successfully.

Give us the tools and we’ll finish the job. 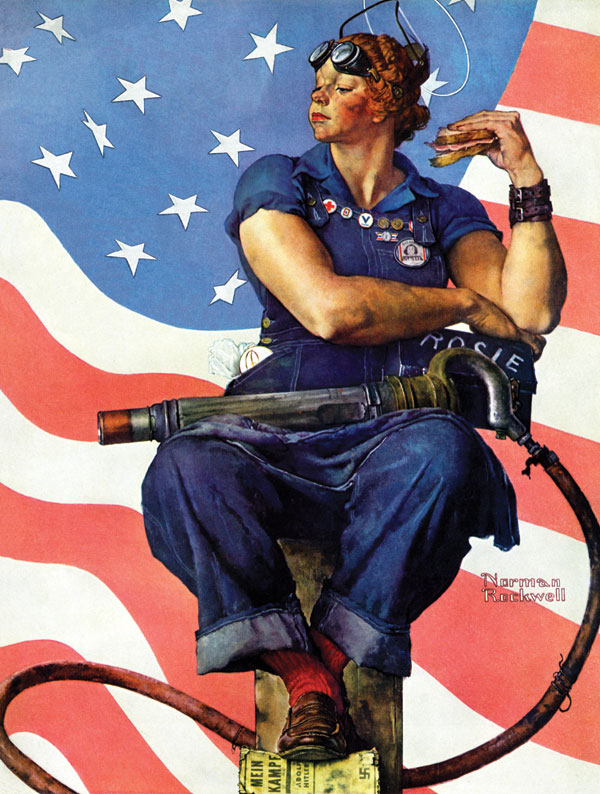