I’m going to tell you how the coronavirus is going to disrupt your grocery-shopping and food-eating experience.

“So, Robert,” you ask, “exactly how is this going to disrupt those things?”Actually, I don’t know. Neither does anybody. Sorta my point, really.

And this advice holds true for any disaster, not just the current one.

Sure, Plant a Garden 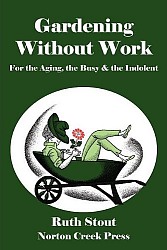 Now, I’ll be the first to admit that when people say, “Plant a garden,” it’s the best advice ever. Karen just built two raised garden beds and is planting away like she has three green thumbs. I’ve also reprinted the world’s more charming gardening book, Gardening Without Work by Ruth Stout. It’s available in Kindle form as well as paperback, so if there are shipping delays from your favorite online bookstore, you can still get it right away.

So here’s the thing about a garden: Garden vegetables are wholesome and taste great. They’re loaded with vitamins and minerals. They even have some protein. They get you out into the fresh air and doing something productive and relaxing. All this is wonderful.

But do you know what garden produce doesn’t have? Calories. No, really! Garden produce is low in calories. Which is great if you have plenty of calories from some other source. But what if quarantines make the supply of groceries to your neck of the woods iffy?

Give Us Thirty Days of Daily Bread

Well, if the garden isn’t going to be calorie-rich, then you might want to stock up on something that is.  Something with a long shelf life. Maybe a month’s worth. Mostly this comes down to grain-based products, though fats and oils are also part of the package.

Why? Well, it turns out that most carbohydrates weigh in at 110 calories per ounce, or 1800 calories per pound. So if you’re buying calories, bread, crackers, oatmeal, cereal, pasta, flour, rice, sugar, candy, etc., they all have about the same number of calories per unit weight. This makes it easy to mix and match.

Not potatoes, though. They’re mostly water. Potatoes are only about 330 calories per pound. We’ll deal with that in a minute.

So let’s do some very simple math. Suppose your household consists of two adults and you want calorie reserves for thirty days. The average American eats 3,600 calories per day, equivalent to exactly two pounds of carbohydrates.

But I’m going to assume that man doesn’t live by bread alone, so let’s just create a one-month reserve of half that much, or one pound per person per day. Thirty pounds per person per month, or sixty pounds total for our family of two.

What should you get? Things with a long shelf life that (a) you’ll actually cook and eat and (b) you’ll enjoy cooking and eating. For a while, anyway.

Mix and match according to taste so it adds up to thirty pounds per person. Most of this stuff has a ridiculously long shelf life, so if you buy things you know you’re willing to eat, you ought to be able to consume it all eventually, without waste, even if the epidemic magically vanishes tomorrow.

Try not to be too aspirational. Sure, this is your big chance to learn to cook everything from scratch and do everything the hard way. But don’t bet on your own perfect follow-through. Buy enough that you can make a good stab at learning these new skills, but mostly buy things that you know you can make, like Kraft Mac and Cheese.

Oh, and remember to get the other ingredients, too. If you buy an armful of Mac and Cheese boxes, you’ll need milk and butter, too. Maybe canned or powdered milk for its shelf life.

If you like potatoes (as I do), count a five-pound bag of potatoes as the equivalent of one pound of anything else on the list.

No. A thirty-day reserve of life’s essentials is just ordinary prudence. It’s enough to keep you from becoming a burden to the community when they’re least prepared to help you, because everyone is in the same boat.

Anyway, I’m sure you’ll share your abundance when the time comes, just like many people did when they donated their N95 masks to hospitals instead of keeping them for themselves.

As I learned with my work with baby chicks, the thing that makes creatures (including humans) suffer are, first, a lack of calories (they get hungry). Later, a lack of protein makes itself felt. Much later, a lack of vitamins and minerals starts causing trouble.

Your garden will work wonders in the vitamin-and-mineral department once harvest begins. In the meantime, a supplement is a good idea. Produce is labor-intensive and has a short shelf life, so the stores might have trouble keeping those vitamin-filled greens in stock.

We’re used to eating far more protein than we need. A few eggs, a little cheese, some meat … you get the idea. I have a freezer full of meat, so I confess I haven’t given this a ton of thought.

One reason why I’m happy to recommend that you only stock up on carbohydrates for only half your calorie intake is because we’re used to eating tons of fat. Cooking oil, shortening, butter, margarine, fatty meats, peanut butter: you name it. A lot of these things have a long shelf life, so lay in a little extra. Fat has more than twice the calories per ounce of grains, so it packs a big punch.

Karen scored a fifty-pound bag of bread flour that a local supermarket was practically giving away. It was destined for their bulk bins, but they decommissioned their bulk bins for sanitary reasons during the epidemic. But we have a bread machine and a Kitchenaid mixer with a bread hook, giving us two ways of making bread that don’t involve kneading bread dough  until your arms fall off.

Ten pounds of white rice, a big box of Minute Rice, a big bag of barley, some beans, oatmeal, and a couple of bags of potatoes rounded things out. And a fifty-pound bag of sugar for jam and preserves.

Most of the bread flour will go into the freezer, since fifty pounds is a lot, but we’ll use it up eventually. The rest is a no-brainer.

What About the Chickens?

If you have chickens and the supply of chicken feed becomes intermittent, they can stay healthy on grains and greens, though they won’t lay well or grow very fast. Dry dog food or cat food plus grains of some kind are also possibilities. Buy a bag of oyster shell so they can get the calcium they need, otherwise they’ll stop laying if they aren’t getting enough.

Always give them as much as they’ll eat of whatever you have. You’d look like a big silly if you half-starved them because you expected a shortage to last and then it didn’t.