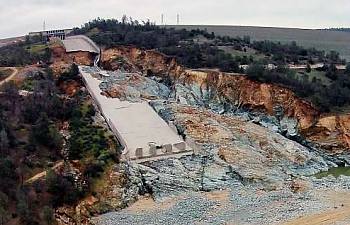 After the recent failure of the Oroville dam’s main spillway, the question I keep asking myself is, “Where did the engineers go to school?”

Back in 1889, the South Fork Dam broke after heavy rains, opening up like a zipper and flooding Johnstown, Pennsylvania, killing 2,209 people. The dam had overflowed, and dams fail catastrophically when this happens. Especially earth-fill dams.

In Johnstown, the dam had been designed and built properly, opening in 1853. It acted as a reservoir for a canal system. To prevent failure, it had three large iron pipes with valves at the bottom, allowing water to be be released in high volume at no risk. The main spillway, which gave an alternate path for surplus water from the dam when it was full, was nowhere near the earth-fill portion of the dam, but was blasted out of bedrock in the surrounding hill.

The dam failed because, after the canal system went bankrupt due to the development of railroads, the the new owners of the site (rich dudes who wanted a resort with a big lake) rebuild the dam incompetently, omitting the iron discharge pipes at the base. This meant that there was no way to lower the water level in the dam. It was always full, and as soon as a series of rainstorms put in water faster than it could leave via the spillway, water poured over the top of the dam, and the dam eroded faster and faster until suddenly it was gone.

Fast-forward to Oroville, which came awfully close to a similar failure. By the standards of Johnstown’s 1853 South Fork Dam, the Oroville Dam has these flaws:

In a structure as dangerous as a big hydroelectric dam, with a long working lifetime, and the certain expectation that many operating decisions will be made by politicians rather than engineers, the most important design criterion is this: Not only should the dam be capable of being operated by morons, it should be capable of being maintained by morons. Morons who lost the maintenance funds at the dog track.

A dam isn’t something like a railroad, where the trains stop running unless there’s continuous maintenance. It’s something that appears to be kinda-sorta working until a wall of water and debris sixty feet high wipes your city off the map.

To my way of thinking, this requires that dams be build more to be low-maintenance than to be efficient, and with lots of redundant safety features: preferably ones that work okay even if everyone but the janitor and the UPS guy have been passed out on the floor for the last 25 years.

Periodic inspection and regulation are okay to the extent that they aren’t crooked—and good luck with that. A good design needs to survive intervals of incompetence and dishonesty just much as it needs to survive natural disasters.

But no one is going to be crazy enough to declare us dictator and put our policies into practice, so enough of the big picture! Here’s my main take-away: Make sure your next home and workplace are well above your local floodplain. During the 1996 flooding here in Oregon, as I drove between Corvallis and Portland, I noticed that all the little hills that were high and dry above the floodwaters had older houses on them. Those old-timers knew a thing or two.

3 thoughts on “How Not to Have a Dam Failure”