“A chicken house should either be small enough that you can reach into any part of it from outside, or big enough to walk around in.”
— Traditional poultry maxim

My wife, Karen Black, invented these simple chicken houses in the Nineties, when she decided she wanted a pen she could walk around in, rather than the standard Salatin-style pens that are only two feet high. This is in keeping with a old-time poultry maxim: “A chicken house should be small enough that you can reach into any part of it from outside, or big enough to walk around in.”

If you don’t do this, you create a chicken house that is inaccessible, which leads to fuss and bother, which  in turn leads to chickens that are less well-kept than they should be, and chicken poop on your hands and knees.

We tried an Andy Lee-style “chicken tractor,” which was built by the book and was trhee feet tall, three feet wide, and eight feet long.

(By the way, I dislike the term “chicken tractor.” Scratching and pooping doesn’t resemble plowing at all.. I generally call them pasture pens.)

We built a few pasture pens to Joel Salatin’s specifications, though ours were smaller. They were almost as unsatisfactory as the chicken tractor. Yes, they’re lower, so you can get into them (and then crawl around on hands and kness—helloooo, chicken poop!). Yes, they’re lots wider than they are tall, so they don’t blow over as easily. But they still aren’t built on skids, so they’re still impossible to move without a dolly, and their low roof not only makes it hard to do things, it’s hard to see what’s going on in the back (which is where sick chickens tend to hang out).

They also require twelve diagonal braces and a diagonal cable at ground level due to ludicrously weak aluminum siding, which provides no stiffness.

If you have to build a low, square pasture pen, I recommend my modified pasture pen, which is easy to build and uses skids, so a child can move it without a dolly.

Karen’s hoop-coop pens are made from with lightweight cattle panels bent into a semicircle, attached to a wooden bottom frame, and covered with a tarp. The ends are framed with wood, with a door or hatch in the front end.

Note: Some of my pictures are from before our latest improvements, so read the text carefully!

Lightweight stock panels are made out of heavily galvanized wire and are 16 feet long and about 4 1/2 feet high. They cost between $12 and $17 at local farm stores. We use two-panel houses to make a roughly 8’x9′ house with a ridge height of about six feet. This is good for between 50 and 75 broilers if you butcher them all at once. We butcher them over a period of two weeks, always choosing the largest birds, and in this case the house is good for up to 100 broilers, with care. 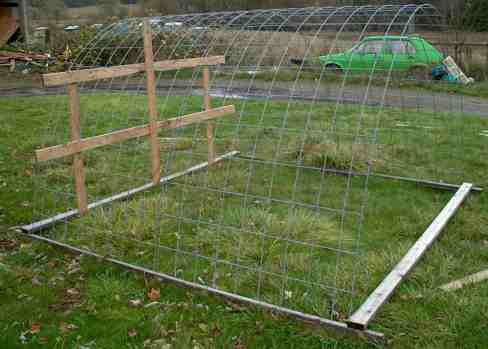 A partially framed Mark II hooophouse, with the bottom frame and back wall framing in place, but no diagonal bracing,  doorframe, or ridgepole yet. Note that the bottom frame consists of two skids (in contact with the ground) and two sills (on top of the skids). This particular house suffers from excessive amounts of sag in the sills, which should have been installed on edge.

The back end is covered with a tarp up almost to the top. A gap is left at the top of the rear wall to allow roof ventilation. The front is kept entirely open, covered only with chicken wire. This should be heavy-duty 1″ chicken wire, preferably Red Brand. 2″ turkey wire doesn’t last. Neither do cheap brands of netting. The easiest method of attaching the chicken wire is to use plastic tie wraps.

The door can be arranged as a lift-out hatch rather than hinged. It is our experience that doors can get ripped off their hinges by weather and other accidents. If you do use doors, they should be arranged so that if the front wall of the house warps &emdash; which it will, since it’s not very rigid &emdash; the door won’t stick.

The tarps can be attached to the wood framing with a staple gun and to the panels with plastic tie wraps.

The house needs to be mounted on skids. That is, only two walls should be in contact with the ground. The others should be at least 1 1/2″ off the ground. 3 1/2″ is better. If the front and rear walls drag on the ground, the house is very difficult to move and quickly becomes damaged. Also, broilers who are caught by the back wall tend to be crushed if the wall is dragging on the ground, but pop through unharmed to the outside if it is elevated a few inches. Flaps on the two elevated walls, made from old feed sacks, lengths of tarp, or (ideally) black rubber floor-mat material, will close off the gap and help keep predators out and broilers in.

The top of the roof needs to be 100% waterproof. Away from the top, as the slope of the sides increases, the water has less tendency to drip though even if there is a hole. Thus a high-quality silver top covering the top third of the roof, plus a cheap top covering the rest, will work almost as well as the more expensive option of a silver tarp over everything.

The tarps will flutter and flap against the cattle panels and will wear themselves out in the course of a season or two. Using two layers of tarp will help, and of course snugging them down well also helps.

We use these houses for broilers because they can be moved by hand every day to a fresh patch of grass, since otherwise the floor becomes a solid layer of chicken poop. Broilers don’t forage much even if you leave the doors open, which we don’t do, since when they’re young, they’re too dumb to come in out of the rain, and they also tend to sleep outside, where the hawks and owls can get them. Some people arrange their schedules so they always, without fail, are on hand to shoo the chickens inside and close the doors at dusk, but we decided to have a life instead!

We don’t use these houses for hens. Our hen-houses are heavier and we move them with a tractor a few times a year. The difference is due to several factors:

One thought on “Better Than Chicken Tractors: Hoop Coops for Free Range Chickens”