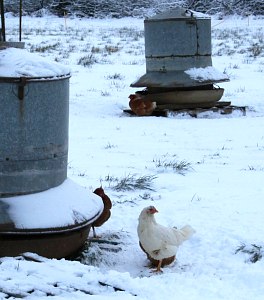 It’s 18 °F outside and there’s about four inches of snow on the ground. My chickens are all in open coops that most people would consider suitable only for summer housing, never for winter housing. Not even in my mild Oregon climate.

But I not only have open houses, but all my feeding and watering is done outdoors, year-round. What’s up with that?

Yesterday there was snow, and the day before there was a little bit of snow, but it was above freezing. My chickens didn’t like the looks of the snow and most of them stayed inside. To get them out to the feed, water, and nest boxes, I drove them out of their houses. The first time, there was hardly any snow, and you could see their reaction of “Hey, this isn’t bad!” Once out of the houses, they were in no rush to go back in. Later, with more snow, they were less certain, and some jumped back inside right away. We’ll see what happens today. They’ll get used to it eventually, but they need to keep eating if they’re going to keep laying, so I want them to get used to it now.

Today, the temperatures are going to stay below freezing all day, so I’m going to have to schlep buckets of warm water out to them. In very cold weather, the water in the buckets will freeze, but I just bring them back inside and put them next to the stove, and eventually they thaw. A lot of people like rubber feed pans because the ice can be dumped on the spot, and I’ll be trying that, too.

My houses don’t have insulated roofs. It usually it doesn’t matter, because with open housing like mine, the inside temperature is the same as the outside temperature, so water doesn’t condense on the ceiling and drip on the chickens. If temperatures are above freezing but there’s snow on the roof, this isn’t true anymore. The floors in the houses were pretty nasty yesterday. No doubt they’re frozen now. I haven’t been out to check yet.

I’ll report back later and tell you how it’s going. Based in past experience, the chickens’ health will be completely unaffected by any of this, just like it says in Fresh-Air Poultry Houses, (which is full of all sorts of surprising stuff). I’ll post some photos, too. 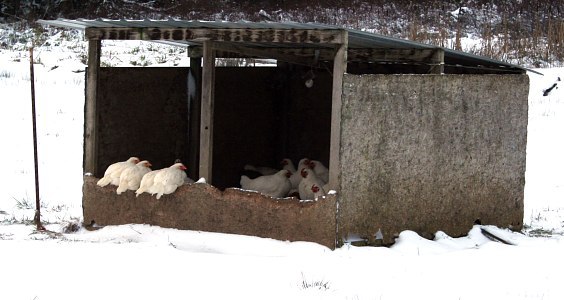 Here is one of my “low houses,” whose occupants don’t seem to want to go outside. Note that some of the hens are roosting on the front wall rather than inside. The cold doesn’t seem to bother them.

Only a handful of chickens were moving around outside, but I scattered some whole wheat and drove the chickens outside. Once there, a lot of them started their usual routines, heading off to the feeders or the nest boxes. 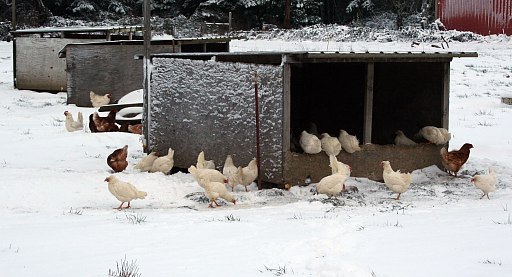 Here’s a view after I scattered some grain and made them go outside. Business as usual, more or less.

The snow is a very light powder and my houses are very open, which means that there’s some snow in all the houses. The chickens look active, alert, and dry, though they would like the snow to go away.

The chickens all looked fine, except one hen who was shivering badly. I think she spent the night outside. I put her in a nest box, which gets her out of the wind and should allow her to warm up quickly.

Later I’ll bring them some warm water. Their waterers are hidden under the snow and are frozen solid.

Partly sunny. I brought two buckets of warm water out to the chickens, who pretty much ignored them. Obviously, they aren’t very thirsty.

They showed more interest in the grain I scattered for them, but they aren’t acting like they’re starving. There were a reasonable number of eggs to collect.

The hen I’d put in one of the nest boxes died, which surprised me, because I didn’t think she was in that much distress. I also thought the nest-box trick would work. I have community nests (with are big nests that hold a lot of hens at once, and have no interior partitions), and I knew that there would be other hens right up against her in there, which would help warm her up. It wasn’t enough.

All the other chickens look fine. The situation looks stable. Tonight at dusk I’ll go out with a flashlight to make sure there aren’t any other hens sleeping outdoors.

This cold snap is supposed to last about a week and will reduce egg production significantly unless the hens get used to snow in a hurry. I don’t expect any other ill effects (except for any remaining chickens that sleep outdoors).

This kind of cold snap occurs only about once every five years. If it happened more often, I’d take more steps to prevent it.

I took a a tour around the houses. One hen was sleeping on the roof of a house, a couple were roosting on the side walls, and at least a dozen on the low front walls. I moved them all inside.

I retrieved the two galvanized buckets I’m using for waterers, since they’ll just freeze solid if I leave them out. I’ll take them back onto the pasture first thing tomorrow morning.

Back when I used winter lights, I had extension cords out on the pasture, so I could use electric birdbath heaters to keep the automatic waterers from freezing (see my winter watering article). This didn’t prevent the hundreds of feet of garden hose from freezing, but most days have highs above freezing, and the hoses thaw by themselves. During a cold snap, I can just fill the chickens’ usual waterers with cold water a couple of times a day. Without the extension cords and the birdbath heaters, I’m reduced to buckets of warm water.  [Note: when I wrote this post, I wasn’t using winter lights, but I’ve since started again]

I forgot to mention that I’ve seen weather this cold before, and this much snow before, but not both at the same time. Before, with cold weather but no snow, the hens were happy to leave the houses and visit the feeders, and my only problem was providing water. In previous snowstorms, the above-freezing temperatures meant that the watering system continued working and (more importantly) that the snow didn’t last long enough to cause much trouble. We’re in for a week of this snowy, below-freezing weather.

Today was more of the same, except that the chickens look happier now that they’re getting used to the snow. They’re spending more time outside. They greeted buckets of water and scratch feed with little more than polite interest, meaning that they’re probably making it to the feeders on their own and learning to eat snow. If anything, they looked less cold today, although the temperatures weren’t any higher than before.

Bottom line: except for one hen sleeping out in the open, none of the chickens seem affected by the cold, in spite of wide-open housing and temperatures as low as 15°F. Being freaked out by their first encounter with snow has been by far their biggest problem.

The weather report is for pretty much the same kind of weather for another week — highs in the twenties or low thirties, lows in the teens or twenties, occasional snow — which is very unusual for around here, a once-a-decade event at most.

Our household water system nearly gave out, but we kludged a fix for it. We have a two-pump system, with a submersible pump in the well, which pumps water into a 1500-gallon cistern, and a jet pump that pumps water out of the cistern and into the house. The path between the well pump and the cistern was frozen. I didn’t notice until I peered into the cistern this morning. It was almost empty and had a skin of ice on top. Not good! The pipe-heating cable that was supposed to keep things flowing had failed. We managed to bypass it with a length of garden hose from a convenient spigot at the wellhead and into the top of the cistern. The water comes out of our well at 50°F, which should prevent any more ice from forming in the cistern.

(In a colder climate, we’d have put this 1500-gallon black plastic cistern in a shed, but as it is, we just left it out in the open.)

The weather is slightly above freezing but there is more snow than ever. The chickens are behaving normally and there are no problems. As I said before, my previous problems were not caused by the cold but by the chickens’ reluctance to go out in the snow, but they had to in order to eat and drink. In a normal operation with feeders and waterers indoors, there would have been no difficulty at all.

The snow causes another problem, though. Normally, my highly ventilated houses don’t have any problem with condensation. The air inside the house is the same temperature as the air outside the house, so there’s no tendency for moisture to condense on the ceiling or walls. But when the temperature is above freezing and there’s snow on the roof, water condenses like mad and drips into the house.

I only have to put up with this for a few days a year in my highly ventilated coops, but people with ordinary coops put with this all winter. By going to great lengths to shut their coops up tight and to keep the temperatures higher inside than outside, moisture is condensing on the walls and ceiling all winter long and dripping back into the house. It turns the chicken house into a disgusting, unhealthy mess. The dampness leads to frostbitten combs, the sight of which tends to make people redouble their attempts to add heat and prevent ventilation. It’s a vicious cycle.

I’ve republished Prince T. Woods’ excellent book, Fresh-Air Poultry Houses, to help get the word out and teach all the nuts and bolts of open-air chicken houses, summer and winter. You should at least click on the link and read the sample chapters. This week’s bout with unusually cold weather (for here) has certainly vindicated Dr. Woods’ main points.

22 thoughts on “Cold and Snow vs. Open Chicken Housing: Who Will Win?”