Keeping the chickens’ water ice-free during the winter can be a struggle! Here are some easy ways to make it happen. 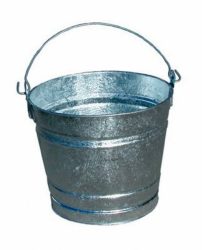 The classic technique for full-grown chickens is the old bucket switcheroo: when you go out to tend the chickens, you bring out a galvanized bucket of warm water, and leave it for them to drink from. When you leave, you take away the partly empty bucket you left for them last time, because if it’s not empty, it’s frozen. You bring the frozen bucket inside with you and leave it in a place where it will thaw a little, so the ice will slide out easily.

I think ten-quart galvanized buckets are the right size for this, though twelve-quart buckets are okay if that’s all you can find. I’ve had too many plastic buckets split when frozen, so I don’t use them anymore.

Here’s an idea hardly anyone has heard about: Make a wooden float for the top of the bucket. It’s just a wooden disc a little smaller than the bucket, with a few 1″ holes drilled in it.

The chickens drink through the holes, and the float delays the formation of ice for a long time.

Even better, the holes prevent the chickens from getting their combs and wattles wet when they drink.

Wet combs and wattles are the major cause of frostbite. Chickens can tolerate a surprising amount of cold if they stay dry. It’s wetness, more than cold, that leads to frostbite.

The water will freeze much more slowly if you provide some kind of insulated sleeve for the bucket (not styrofoam: chickens love to eat styrofoam). Wrapping the bucket in aluminized bubble insulation, available at your hardware store or online, is good.

A more high-tech solution is to use electric heat. A lot of people use overhead heat lamps, in spite of the hideous expense this entails. ($65 per year if you leave a 250-watt bulb on for 90 days at the US average of $0.12 per kilowatt-hour.) Let’s be more targeted!

combined some kind of metal bucket or pan, such as a galvanized pet waterer

. You can also add a wooden float and have the best of all worlds.

These thermostatically-controlled birdbath deicers use a lot less electricity (as low as 40 watts) and 100% of the heat goes to warming the water. I like galvanized and stainless steel pan waterers instead of teh plastic ones because mixing plastic and electric heaters makes me shudder. Sure, the heater has a thermostat, but I prefer not to trust such things fully. If you use a plastic waterer anyway, use a low-wattage heater. A 50-watt heater won’t do much damage.

In hot weather, chickens like cool water, and in cold weather, they like warm water. This is true, but in my mild climate, attempting to keep the chickens lukewarm (except during the brooding period) isn’t something I’d spend money on. But people in colder climates might find it worthwhile.

You can also use heated waterer stands, which will work with a variety of waterers including the usual double-walled water founts. Me, I use automatic waterers when I can, and buckets when I can’t, but lots of people like galvanized founts.

Here’s the rule of thumb: an automatic waterer will be freeze-proof if it has a metal valve. This includes:

When setting these up, avoid using plastic pipe. I use garden hose for everything but the Little Giant automatic poultry founts.

All these waterers can freeze solid without being harmed in any way.

Most kinds of watering systems can be kept going through the use of pipe heating cable. In fact, that’s one of just two ways that I know of to keep plastic waterers going through a hard freeze. I’ll tell you the other one in a minute.

Plastic nipple and cup waterers have everything going for them except that they’re hard to keep going through a hard freeze. They’re made of plastic and are often screwed directly into PVC pipe. Bad things happen when such systems freeze.

If your electricity is reliable, or you have reliable backup power, you can just run pipe heating cable down the length of your watering system and all is well.

The other way to keep your system from freezing is to use a little water pump and create a water circulation loop, where you have, say, a plastic bucket with a birdbath heater in it, and a fountain pump that sends the water down a PVC pipe from one end of the chicken house to the other, with cup or nipple waterers along its length, and then a return pipe that heads back to the bucket. The combination of water motion and heat keeps the water from freezing. A float valve in the bucket keeps it topped off.

A friend of ours uses this simple system to freeze-proof the watering system in a rabbit house that’s over 100 feet long.

Some of these electrical methods have been used successfully with non-electrical heat sources. In the old days, kerosene lamps were the preferred heat source, though charcoal and hot rocks have their uses.

Electricity is extremely reliable and convenient, so off-grid solutions tend to be more troublesome. When electricity is unreliable or nonexistent, I recommend:

I’ve republished Prince T. Woods’ classic Fresh-Air Poultry Houses, which has a lot to say about winter chicken care: especially about why you need to avoid tightly enclosed chicken houses, which adds the dampness that turns cold weather from an inconvenience into a frostbite-producing disaster. And it has a lot of insight into other aspects of chicken care as well. An oldie but a goodie.