1. How Can I Save Money on Chicken Feed?

Here are some tips:

2. Do I HAVE to Feed Free-Range Chickens (or can they find their own feed?)

Remember: Chickens can’t find feed that isn’t there, and the more chickens you have, the less feed there is to go around. You have to match the number chickens to the feed supply, or nature will do it for you through poor health and starvation.

How it was done in the old days. A farmer of 100 years ago might have kept a dozen hens and a rooster through the winter, and allowed the hens to hatch a brood of chicks each in the spring, giving, say, 72 chicks plus the original 13 chickens, or 85 birds total. The old rooster would be sold after the chicks had hatched. The old hens and most of the young chickens would be sold in the fall, and one cockerel and twelve pullets would be kept through the lean months. By having 85 chickens during the fat months and only 13 during the winter, the amount of supplemental feed needed by the chickens would be minimized.

The old ways always involved malnutrition. A flock of 13 chickens might survive all winter on the grain spilled by a cow and a team of draft horses, plus some hay and whatever else they could find. This winter diet would be nutritionally poor (both vitamin- and protein-deficient) and the hens would lay no eggs, but they’d recover in early spring and the cycle would repeat.

Also, because of their thick coats of feathers, it’s hard to tell a malnourished chicken from a healthy chicken at a glance, they way you can by noticing whether the ribs are showing on cows, horses, dogs, and people.

In the bad old days, when people didn’t feed their hens at all, much of the hen’s diet was provided as a side effect of bad sanitation. People threw their garbage out into the street or the barnyard. The cows and horses spilled grain. Manure was everywhere and was full of yummy maggots.

But even with all the natural bounty provided by stone-age sanitation, the number of hens that could be supported without supplemental feeding was very limited.

There are a few circumstances where the diet can be adjusted to reflect reliable forage ingredients, such as old-fashioned “range rations” which left out the vitamins that were provided in abundance by green feed. But enough dry days in a row browns off the grass and makes it unpalatable to the chickens, so this method has its risks.

Also, many of the things hens eat are so tiny that we can’t see them—tiny seeds, tiny bugs, tiny worms. If we can’t see them, we can’t estimate how much the hens are finding, and we can’t know how much supplemental feed they need on a day-by-day basis.

Fortunately for the frugal farmer, hens prefer fresh, natural feeds to dry, processed chicken feed, and will eat natural feeds in preference to store-bought feed whenever they have the chance. This leads to a foolproof strategy:

Offer the chickens as much (balanced, high-quality) chicken feed as they want, and settle for whatever amount of foraging they discover on their own.

This will maximize production and profitability. Sure, if you’re an expert and are always very careful, you can get some eggs out of a flock you don’t feed at all, even without actually crippling your chickens through malnutrition, but you won’t get very many. It’s a mug’s game.

See also my blog post on Feeding Scraps to Chickens.

3. What Should I Feed My Chickens?

Feed your chickens chicken feed. Some people like to complicate the feeding problem beyond all reason. Ignore them. Go down to the feed store and buy a sack of feed that’s labeled for the kind of chickens you have (chick starter, broiler starter, layer feed, etc.). This will be a balanced feed, and the chickens will do fine even if you don’t feed them anything else.

You can also set out whole grains in a separate feeder if you like. I do. This can save you a lot of money if you have a source of cheap grain, especially if you use a high-protein chicken feed. For example, a high-protein layer ration with 20% protein will be formulated for use with supplemental grain, with the assumption that the hens will eat about 50% layer ration and 50% grain. Chicks need lots of protein and will pretty much ignore supplemental grain until they’re older and aren’t growing as fast. There’s really little point in offering them grain until they’re 6-8 weeks old.

If you want to try something fancier, I recommend that you get a copy of Feeding Poultry by G. F. Heuser.

See also my blog post on “Why Chicken Feed?”.

Ah, vintage Seventies hippie-dippy fear-mongering! We just don’t get conspiracy theories like that anymore. (“Everyone is a poisoner except me,” said the organic farmer.)

In the real world, of course, feed stores are totally dependent on repeat business, of course. If your chicken raising is unsuccessful, you won’t raise any more chickens, and they can’t sell you any more feed. So, presumably, any feed store that has been in business for more than a few months is selling feed that gets the job done.

An exception, as previously mentioned, is cheapskate feeds. If you’re a cheapskate, you insist on buying the very worst feed available, no matter how bad it is. There are enough cheapskates that most mills have a special line of feeds just for them, loaded with the traditional low-feed-value fillers: wheat bran, middlings, mill run, etc. Not that cheapskate feeds are poisonous. They’re just crummy.

I have never had any trouble with commercial feed. In general, you should ask around and see which feed store is considered to be the most reputable by your neighbors, and buy from them. Local reputation is rarely wrong.

Read the feed tag to see what’s in the chicken feed. I also taste chicken feed sometimes to see if it has any off flavors. It shouldn’t have any kind of burned or rancid taste, which would indicate the use of bad ingredients. But every time I’ve tested, it’s just been incredibly bland, not distateful at all. It’s so bland, you could probably sell it as a health-food cereal.

Medicated feed says “MEDICATED” in large letters on the feed tag (in the U.S., anyway). The only medication I’ve ever seen in feed-store chicken feed is a coccidiostat in medicated chick and turkey starter feeds, which keeps the chicks from coming down with coccidiosis. You should have no trouble getting non-medicated feeds if that’s what you want.

That’s ancient history, and was mostly mythical even then. We’re talking about the Truman and Eisenhower years here!

Hormones in poultry feed are illegal these days. Hormones had a brief burst of popularity in the late Forties and early Fifties. By the time the once-popular hormone DES was banned in 1959, it had fallen into disuse.

Anyway, it wasn’t used in the feed, but was in the form of a little time-release pellet that was injected under the skin.

There’s a lot of folklore and superstition in the chicken-raising community. I once did a thorough review of the chicken literature back to 1900, and every single superstition that has been totally debunked since then is still believed. And not just by a handful of cranks, but by lots of people.

7. What do You Feed Your Chickens?

The reason I do this is that chickens have a definite calcium appetite (oystershells), energy appetite (grain), and protein appetite (high-protein poultry ration). A hen who lays an egg a day will eat far more calcium than one who lays an egg a week. If the only source of calcium is the chicken feed, she will eat feed just for its calcium, and get fat. With calcium offered on the side in the form of oystershell, she can eat the calcium she wants without unwanted calories. Similarly, a hen who is not laying at the moment wants little calcium or protein, and will eat mostly grain, which is cheaper than the other ingredients.

Furthermore, forage is high in protein. When the pasture plants are bright green and succulent, or when there are lots of slow-moving bugs and worms around, the hens get a lot of protein by foraging, turn up their noses at the pellets, and eat mostly forage and whole grain. When the pasture plants turn brown and the insects move too fast, they fall back on the pellets. Since pellets are more expensive than grain. I win.

Research is inconclusive about the value of this method when all the ingredients are bought at commodity prices. However, most people buy by the sack or by the ton. If you find your local grain wholesaler or a local farmer with a full granary, you can buy grain at wholesale prices and pellets at retail, which will bring you big savings. We buy our grain at Venell Feed in Corvallis Oregon, and broiler/layer feed from Union Point Custom Feeds in Brownsville, Oregon.

For pullet chicks, I feed chick starter for several weeks, then offer grain in a separate feeder. Once the chicks go onto pasture, they get the same ration as the hens.

Broiler chicks start with a 22% broiler starter, graduate to the 20% broiler grower ration from Union Point, which is later supplemented with whole grains.

Turkeys are similar to broilers: start with a 28% turkey starter, graduate to a 20% broiler grower, which is later supplemented with whole grains.

8. What About Animal Byproducts in the Feed?

I don’t use poultry feeds that contain animal poultry byproducts such as beef scrap. I don’t have anything against beef scrap in general, but when I had goats, they would sometimes get into the chicken feed. Since one of the cornerstones of BSE prevention is to prevent ruminants from eating meat byproducts of other ruminants, so I avoid feeds with beef scrap for that reason.

If that’s what you want. I don’t. And it’s unlikely to save you any money: you save money by feeding your inexpensive ingredients on the side, as I explain in Save Money on Chicken Feed.

Poultry nutrition is an interesting topic and makes a good hobby, though I find the theory to be more useful than the practice: I’d rather pay a good feed mill to do the formulation and mixing for me, though I’m glad I’ve read several poultry nutrition books, so I understand what it is that I’m delegating. 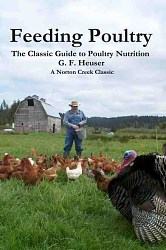 You should read a book on poultry nutrition first. The best one is Feeding Poultry: The Classic Guide to Poultry Nutrition by G.F. Heuser. It’s so good that I brought it back into print myself, under my Norton Creek Press label. It covers all sorts of topics that are neglected in more recent poultry nutrition books, such as the nutritional value of free range. At the same time, it’s recent enough that all the major nutrients and topics get a full treatment. I like this book because it is written for the intelligent layman rather than an audience of professional scientists.

Back to the FAQ Page